Our science question is: Why do we wear trainers for PE lessons?

We have been learning about forces in science.

Force is the “push” or “pull” exerted on an object to make it move or accelerate. We have been measuring force using the Newton meter.

Click on this BBC link to learn more about forces https://www.bbc.co.uk/bitesize/topics/zvr3nrd

This week we investigated the amount of force required to move a shoe across difference surfaces. 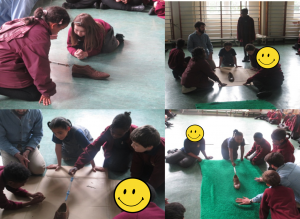 Then we made conclusions about the friction acting on the surfaces based on the amount of force required to move the shoe.  The rougher the surface, the more friction is produced.

Did you know that friction also produces heat? Have you tried rubbing your hands together quickly, you will feel them get warmer. This is caused by friction!

What do you think about when you hear this music?

Info about the piece & Composer: The William Tell Overture is the overture to the opera William Tell (original French title Guillaume Tell). William Tell premiered in 1829 and was the last of Rossini’s 39 operas, after which he went into semi-retirement (he continued to compose cantatas, sacred music and secular vocal music). The overture is in four parts, each following without pause.

There has been repeated use (and sometimes parody) of parts of this overture in both classical music and popular media.

Gioachino Antonio Rossini was an Italian composer who gained fame for his 39 operas, although he also wrote many songs, some chamber music and piano pieces, and some sacred music. He set new standards for both comic and serious opera before retiring from large-scale composition while still in his thirties, at the height of his popularity.

Born in Pesaro to parents who were both musicians (his father a trumpeter, his mother a singer), Rossini began to compose by the age of 12 and was educated at music school in Bologna. His first opera was performed in Venice in 1810 when he was 18 years old.

William Tell was a folk hero from Switzerland, who according to the story, refused to bow down to a pole holding the hat of a nasty ruler named Gessler who had taken over the place where William Tell lived. He was arrested and forced to shoot an apple off his son’s head with a crossbow. If he did not, both he and his son would be killed. So he shot the apple off the son’s head and did not harm him. He is considered a legend and his actions helped form Switzerland as a nation.

Position and Direction! Playscript “Goodbye my friend.”
Scroll to top