Although this holiday has commonly been called “Chinese New Year” in the West, China is not the only country to observe it. Lunar New Year, also known as the Spring Festival, is the most celebrated and longest of all Asian festivals, and is observed by millions of people around the world.

The traditional Chinese calendar is a lunisolar calendar, which means that it is based on astronomical observations of the Sun’s position in the sky and the Moon’s phases. This ancient calendar dates back to 14th century BCE (whereas the Gregorian calendar was introduced in 1582). The Chinese lunisolar calendar shares some similarities with the Hebrew calendar, which is also lunisolar, and it has influenced other East Asian calendars, such as those of Korea and Vietnam.

As with many winter solstice celebrations, the symbolic darkness of night is banished by the light of fireworks, lanterns, and candles. Man-made paper lanterns are hung by the hundreds in public areas, bringing good luck to the new year.

There are dragon dances, performances, and festival parades with music and acrobatics. The festivities continue for two weeks, finishing with a special lantern festival, which signals the end of the New Year celebration period. 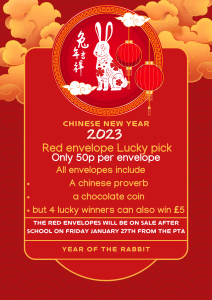 Each envelope will have a wise proverb and a chocolate coin and 4 lucky envelopes will have £5 inside!! Each Envelope will be 50p – so try your luck and see if you get lucky!!